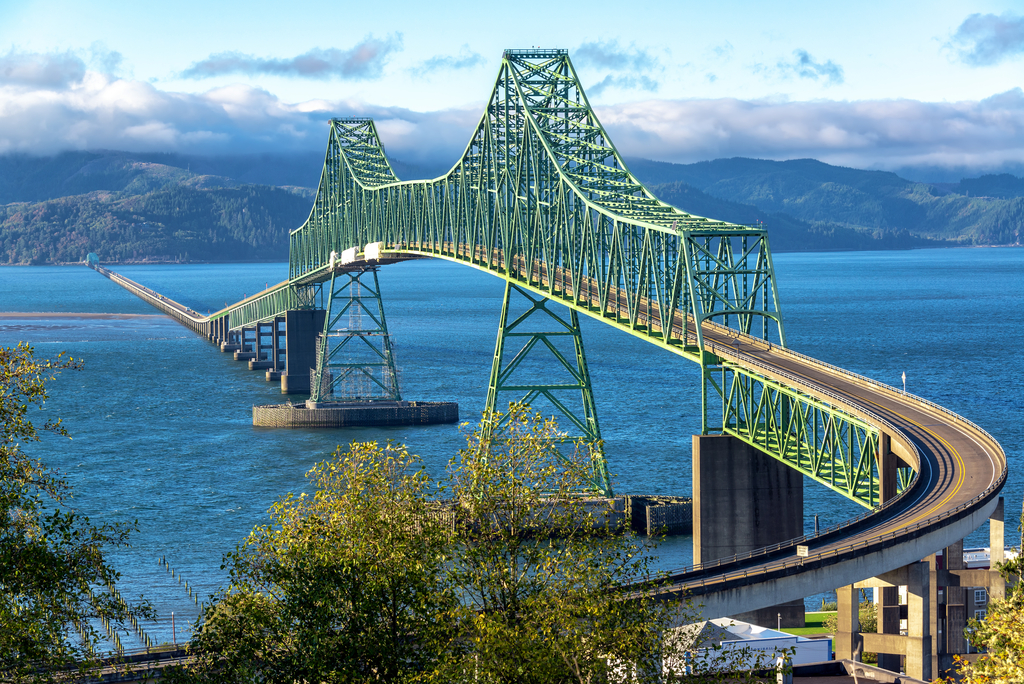 The first town in Oregon, this hotspot for heritage tourism is also home to a thriving arts scene and a wealth of natural beauty.

The seat of Oregon’s Clatsop County, the town of Astoria is built on the Oregon bank of the Columbia River that denotes the state’s northern border with neighboring Washington. This location made it a regional trading hub even before its official incorporation in 1876. The original settlement, Fort Astor, was built by fur mogul John Jacob Astor in 1811, making it the oldest city in the state of Oregon. While large nearby cities like Seattle and Portland have since eclipsed Astoria as the region’s economic hubs, it remains a major center of trade and industry for the Columbia Basin. Starting in the 1980s it became a port of call for cruise ships, expanding its appeal for tourists, who have long been drawn to the town’s excellent sport fishing and historical significance. It’s recently become known as a creative hotspot, with more of its population made up of artists, designers, and other creative professions than 90% of cities in the United States.

Where to live in Astoria

With a population of around 10,000 people, none of Astoria’s neighborhoods are especially dense or crowded. Having said that, houses further inland tend to have larger yards and more space between neighbors, with a vibe that varies between suburban and rural depending on how far from the city center you go. Neighborhoods along the river are generally more compact with a small-town feel. These coastal areas are better if you plan to get around on foot or using public transportation.

For those who want to be in the heart of things, you’ll want to live in one of the riverfront neighborhoods. Areas like the city center, Uniontown, and Tongue Point Village have a good variety of restaurants, shops, and other amenities, without losing the laid-back, peaceful atmosphere Astoria is known for. You can also live close to nature if you choose to in Astoria. Inland neighborhoods like Navy Heights and Svensen Junction have tons of trees, hiking trails, and green space where residents can enjoy the outdoors any time.

Astoria isn’t just the oldest city in Oregon, it was also the first American settlement established west of the Rockies, giving it a longer history than many places in the western US. Here are some more interesting facts about this historic city:
1 / 8

February is the best month for festivals.

There are a number of popular festivals throughout the year in Astoria, but the two biggest happen in February: The FisherPoets Gathering, which celebrates poetry and songs about commercial fishing; and the Festival of Dark Arts, which features local beer and crafts ranging from glass blowing to tattooing.
2 / 8

It gets a lot of Goonies-related tourism.

Fans of the classic ‘80s film can see where the movie’s most iconic scenes were filmed in Astoria, such as the old county jail (now the Oregon Film Museum) and the homes of the film’s main characters.
3 / 8

The people are smart.

More than 1/3 of the adult population of Astoria have completed at least a bachelor’s degree (33.8%), substantially higher than the US average of 21.8%. This makes it one of the best-educated communities in the nation.
4 / 8

It’s the western end of the TransAmerica Bicycle Trail.

Running 4,228 miles from Yorktown, Virginia to Astoria, the TransAmerica Bicycle Trail was the first fully-mapped bike route across the United States. Biking the entire trail usually takes 2-3 months, depending on the biker’s speed and stamina.
5 / 8

The town was twice destroyed by fire.

The marshy ground in Astoria led to most of the original buildings being constructed on raised wooden pilings. This created the ideal environment for fire to destroy the downtown area, first in 1883 and again in 1922.
6 / 8

The Goonies is far from the only movie that used Astoria as a filming location. The first movie was shot in Astoria in 1908 (The Fisherman’s Bride). Other notable movies filmed here include Short Circuit, Free Willy, Into the Wild, and The Ring.
7 / 8

Astoria was a popular destination for immigrants in the 19th century, with large numbers of Swedish, Finish, and Chinese people settling in the area to work at the canneries. At the turn of the 20th century, about 20% of the population was Chinese, and the town has maintained its diversity to this day.
8 / 8

John Astor asked Irving to write about the Pacific Fur Company, resulting in the 1835 book Astoria. This mythologized account made Astoria an appealing destination for settlers moving west in the mid-1800s and likely played a major role in the town’s early growth.
Prev
Next

The workforce in Astoria is a good blend of white-collar and blue-collar occupations. Before the 1980s, the town’s economy was primarily driven by industry and manufacturing, with fish canneries and lumber mills among the top employers. While manufacturing still plays a role in the local economy, the tourism and service industries are the primary employers in Astoria today. Astoria’s comparatively low unemployment rate makes it a good place to be if you’re looking for traditional employment. Along with service industry and manufacturing jobs, there are a growing number of administrative and professional positions available in the city, particularly in health care, transportation, and logistics.

How good is Astoria for Digital Nomads or Remote Work

Remote work is changing how the global workspace operates. In a trend that is showing no signs of slowing down, remote work is rapidly on the increase all around the world—especially in a place like Astoria. And about 25% of remote workers describe themselves as digital nomads—those who like to travel or stay in cities around the world while they work. So, how good is Astoria for both of these growing movements?

Internet access is fast and consistent in all of Astoria’s neighborhoods, with the fastest speeds and most public Wi-Fi options in the city center. The average speed is around 67Mbps, with top speeds of 900Mbps or more.

Coffee culture is strong throughout the Pacific Northwest and that holds true in Astoria. You’ll find unique local cafes throughout the town, with the highest concentration in its riverside neighborhoods. Here are the best local spots for working: Coffee Girl: This unique cafe is built in a renovated cannery on a pier in the Columbia River, letting you take in gorgeous views of the water while you work. The friendly staff, strong Wi-Fi, and organic food menu are other perks, though it can get busy in the afternoon. Astoria Coffeehouse & Bistro: Located in the heart of downtown, this spot is a cafe by day and a bar/restaurant at night, with long hours to suit both early birds and night owls. They have a wide selection of teas along with fresh-roasted coffee and an all-day from scratch menu. Blue Scorcher Bakery & Cafe: This spacious coffee shop has free Wi-Fi and a cozy, rustic atmosphere. Along with delicious coffee and pastries, their menu includes vegan and vegetarian options if you want a healthy bite to eat while you work.

Astoria doesn’t have a huge number of coworking spaces, but what it lacks in quantity it makes up for in quality, especially for those who want to find a community. Here are the three top-rated options: Open Office Astoria: This flexible coworking space on the downtown riverwalk aims to provide its members with an inspiring environment that fosters collaboration. Day passes start at just $25, so it’s an affordable option, as well. Selina Commodore Astoria: This hotel is run by the Selina coworking chain. They offer co-living and rooms for rent, along with common spaces like a library and on-site cafe with free Wi-Fi. CoCommercial: For entrepreneurs and small business owners looking for community, CoCommercial provides workshops and networking opportunities in an inclusive and welcoming environment. All of Astoria’s coworking spaces are in the downtown area, another reason that’s a great neighborhood for nomads who want the option of walking to their workspace.

The community and culture in Astoria are the main appeals for digital nomads, and it’s especially popular with creative nomads thanks to its large population of artists and filmmakers. Adventurous nomads will find plenty of opportunities for hiking, biking, mountain climbing, and other outdoor activities. The consistent climate and relatively low cost of living are also appealing, and there are more bars, restaurants, and cultural events than you’d expect to find in a small town. That makes it the perfect spot if you want a quiet living environment without sacrificing convenience.

Citizens of 39 countries can visit the United States for up to 90 days without a visa. This includes countries in the EU, as well as Australia, Japan, South Korea, New Zealand, Singapore, and the UK. For citizens of other nations (or stays longer than 90 days), a work visa is required. The application process can be lengthy, so it’s smart to start it well in advance of your travels. There are a variety of temporary work visas, with the H-1B visa being the most common for temporary workers. Other options are O-1 and O-2 visas for the sciences and P visas for workers in the arts. Check with the US embassy in your country to find out which will be the best option for you.

Food and Drink in Astoria

The culinary scene in Astoria is booming, and you’ll have more dining options than you probably expect given the small size of the town. Since it’s on the coast, it’s no surprise that seafood features prominently in the local cuisine. South Bay Wild Fish House is a top spot for fresh-caught scallops, prawns, and fish. For a fine dining experience, Baked Alaska has an elegant atmosphere well-suited to its seafood-heavy menu. Astoria is also known for its craft beer scene, with a plethora of popular breweries in the area. Buoy Beer Company on the Columbia River is renowned for its lagers and has a full brewpub menu with options like fried oysters and squeaky cheese curds. Fort George Brewery is one of Astoria’s largest, and has a tap room of experimental beers along with a full restaurant. You can find great international fare in Astoria, too. Drina Daisy is a great spot for authentic Bosnian cuisine and Turkish coffee. The tiny Busu Astoria serves the area’s best ramen, along with other Japanese comfort food. Astoria is also home to unique food trucks, like the Surf 2 Soul (southern soul food) and Sasquatch Sandwich Shop, which you’ll usually find parked outside one of the city’s many breweries.