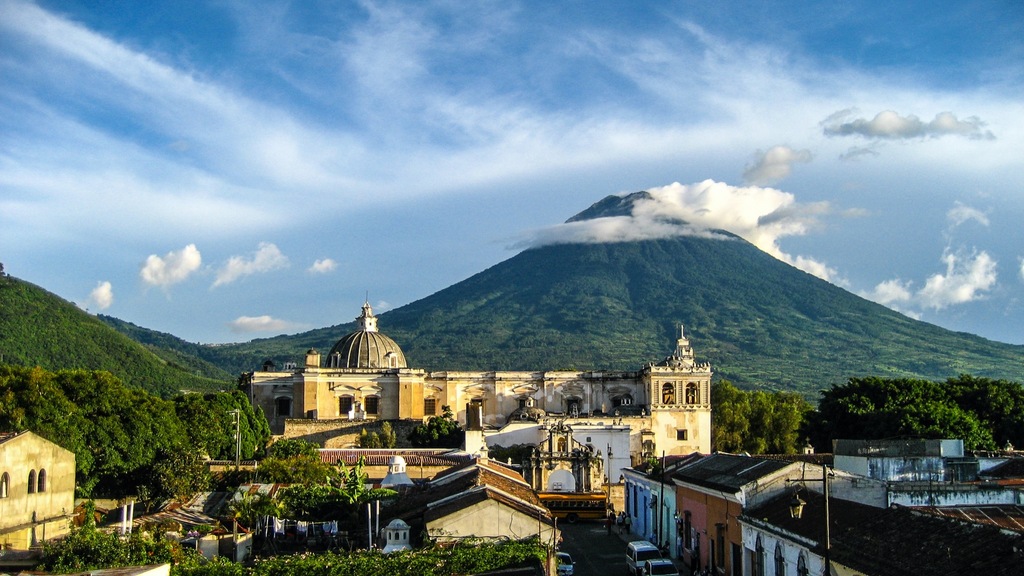 Famed for its volcanoes and coffee farms, this picturesque town in Guatemala’s highlands is one of the most popular destinations for both tourists and digital nomads in Central America.

With its Spanish architecture and cobblestone streets, Antigua has been called the most charming city in Guatemala. Located in the country’s central highlands region, the city was established in the mid-1500s and was the capital of the Kingdom of Guatemala until earthquakes ravaged the city in the 1770s. Once a regional hub for trade, culture, and education, the city was practically abandoned for several decades, reviving in the mid-1800s as coffee and grain production increased in the area. Antigua today is a relatively small city by global standards, with a population of just over 45,000 people. It’s also one of the most visited cities in Central America, renowned for its colonial landmarks, idyllic climate, and easy access to the region’s natural beauty. While the old-world feel is one of Antigua’s charms, it’s a modern, vibrant city with thriving art and culinary scenes. That combination of authentic culture and modern convenience makes Antigua very appealing to digital nomads as well as retirees and other expats.

Where to live in Antigua Guatemala

Antigua is a very compact and pedestrian-friendly town. While there are neighborhood areas, some of which have their own unique feel, it’s easy to get from one part of town to another. That means you can choose where you live based on the feel of the area rather than worrying about convenience. Downtown and the surrounding areas have the highest density of shops, restaurants, and people, and are an appealing area for those who like living in an energetic environment. You don’t have to travel far to find more residential areas, though, good news for those who prefer a quieter neighborhood.

Many tourists stay right in the city center (El Caseo), and this can be a great option for digital nomads and expats, as well. It’s where you’ll find the most active nightlife and the best variety of restaurants and cultural attractions. Nearby Barrio de La Concepcion is less popular with tourists but has a similar vibrant energy. If you’re looking for a more residential area, the neighborhoods to the south of El Caseo can be a good option. Santa Ana is one popular neighborhood for expats, with a bohemian vibe that’s especially appealing to creative types. For those who want to be close to nature, San Cristobal and Colonia en Manchen put it right at your doorstep.

The Spanish colonial architecture you’ll see throughout Antigua is remarkably well-preserved and is the reason the town has been declared a UNESCO World Heritage site. Here are some more interesting facts about this picturesque city:
1 / 8

Some of the world’s best coffee is grown nearby.

Volcanic soil is excellent for growing coffee, and as we already pointed out, the area around Antigua has a lot of it. While Guatemala doesn’t export as much coffee as nearby Costa Rica, its beans are gaining a following among coffee connoisseurs.
2 / 8

Some of the nearby volcanoes are still active.

There are four major volcanoes around Antigua. Acatenango and Volcan de Agua are dormant, but Volcan Fuego and Pacaya are among the most active volcanoes in Central America, with the last eruption occurring as recently as 2015.
3 / 8

People in Guatemala tend to speak more slowly and clearly than those from other Spanish-speaking countries, making Antigua a popular destination for those looking to improve their Spanish fluency.
4 / 8

Nearby Lake Atitlan is the deepest in Central America.

Surrounded by volcanoes, Lake Atitlan is a top tourist destination for its beautiful views, but it has another claim to fame. Its depth of 340 meters makes it the deepest lake, not just in Guatemala, but in the entirety of Central America.
5 / 8

It’s easy to explore on foot--just watch your step.

The old cobblestone streets in Antigua are part of its charm, but they also get slippery when wet and are riddled with uneven stones and potholes ready to twist unsuspecting ankles. Sneakers are a better footwear choice than flip-flops or high heels if you’re getting around on foot.
6 / 8

The city was founded three times.

A series of natural disasters shaped Antigua’s early history. First established in 1524, the city was destroyed by a mudslide in the 1540s, and had to be rebuilt a third time after the earthquakes of 1773. This is the main reason you won’t see many pre-1800s structures in Antigua despite its storied history.
7 / 8

It’s the birthplace of chocolate.

Cacao was first used by the Guatemalan Mayans, who drank cacao during religious ceremonies and used the beans as currency. This history is celebrated at Antigua’s ChocoMuseo.
8 / 8

Fireworks (called bombas by the locals) are set off regularly during Antigua’s religious festivals--and the city has a lot of them. The biggest festival is the 5-week Semana Santa celebration, when you’ll hear fireworks going off day and night around the city. While this is jarring for newcomers, most people get used to the sound after a week or two.
Prev
Next

Guatemala’s economy has been growing rapidly since the peace accords that ended their civil war in 1996. Antigua’s economy was historically built around agriculture, especially the growth, production, and export of coffee. In recent years, tourism has overtaken agriculture as the primary driver of the local economy, along with related industries like construction, retail, and hospitality. Foreigners looking for traditional employment in Guatemala will have the best luck in the education and service industries. English teachers are in high demand, especially those who are fluently bilingual. Local restaurants and hotels also often look to hire English-speakers to interact with tourists.

How good is Antigua Guatemala for Digital Nomads or Remote Work

Remote work is changing how the global workspace operates. In a trend that is showing no signs of slowing down, remote work is rapidly on the increase all around the world—especially in a place like Antigua. And about 25% of remote workers describe themselves as digital nomads—those who like to travel or stay in cities around the world while they work. So, how good is Antigua for both of these growing movements?

Broadband connections are widely available across Guatemala, and in general wireless speeds are acceptable, if not impressively fast. In Antigua, the average download speed of public Wi-Fi connections measures around 8Mbps, with an average upload speed of 5Mbps.

Considering some of the world’s best coffee is grown in the region, it’s no surprise you’ll find excellent cafes in Antigua. Here are the top spots for working: Samsara: This cafe has a healthy food menu with vegan and vegetarian options along with delicious drinks. It’s open until late, too, and the Wi-Fi is consistent and reliable. Cafe Barista: Located near a park in the city center, Cafe Barista is spacious with ample power outlets and solid Wi-Fi. While it’s not the quietest cafe in town, it’s a convenient option if you don’t mind a bit of background noise while you’re working. Rainbow Cafe: One of the oldest cafes in Antigua, Rainbow Cafe has both indoor and outdoor seating and Wi-Fi faster than the local average. It’s also a popular meet-up spot for expats, making it a great place to find community along with a workspace.

Antigua’s coworking spaces are concentrated in the downtown area. While there aren’t a huge number, more options have become available in recent years as Antigua gains popularity as a digital nomad destination. Here are the top-rated coworking spaces: Selina Antigua Cowork: Selina aims to provide a peaceful work environment for freelancers and entrepreneurs, with both private offices and a variety of shared workspaces and 24/7 access for members. L Creativa: Artists and creative nomads will love La Creativa, which offers shared workspaces as well as workshops and craft courses. Their flexible membership options include day passes and weekly rates, making it an affordable option, as well. Impact Hub Antigua: The Antigua location of this coworking chain offers members a variety of helpful resources and opportunities for collaboration along with a workspace.

Antigua is a very affordable city, and most people can live comfortably on around $1,000-$1,300 USD a month. That’s good news for freelancers and nomads, leaving you time and money to enjoy yourself during your stay. It’s also an easy place to live car-free, with a compact city center and an idyllic climate that’s warm year-round. While internet speeds are on the slower side, connections are fast and reliable enough for most. Overall, Antigua is an excellent city for digital nomads, especially adventurous travelers who want to explore the local landscape.

Citizens of the United States, Canada, Australia, the United Kingdom, and nations of the European Union can stay in Guatemala for up to 90 days without a visa, as long as you have a passport valid for at least 6 months after your arrival date. For longer stays, you can apply for a two-year temporary residence visa. There is a lot of paperwork involved and the process can take up to a year to complete, so you’ll want to start well in advance of your travels if you want to go this route. Check with the Guatemala embassy in your country to find out the specific requirements and begin the application process.

Food and Drink in Antigua Guatemala

Even though Antigua isn’t a large town, you’ll have plenty of dining options to enjoy during your stay. If you’re looking for authentic local cuisine, Los Tres Tiempos has a classic menu, as well as a rooftop bar with great views of the town. Those with a sweet tooth should head to Guatelaria, which has a candy store and delicious desserts along with a traditional dinner menu. If you want some entertainment with your dinner, check out Fridas, a colorful restaurant that’s a popular venue for local bands. Creative diners should head to Sobremesa, an art gallery restaurant run by local chef and artist Alexander Ferrar. You can find international cuisine in Antigua, too. Santo Spirito is the top spot for Italian cuisine, known for their hand-made pasta. For Japanese fare, check out Izakaya, where you can sample a unique fusion of Asian and Central American flavors.